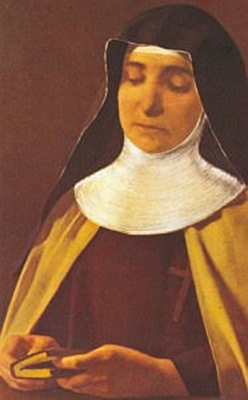 An unknown illness kept the young Maria bedridden for two years; she was cured following a vision of Saint Fiorenzo, and soon after felt a call to the religious life. On 28 May 1846 she entered the monastery of Saint Mary Magdalene de’ Pazzi, Florence, Italy, and though she loved the cloistered life, she realized it was not her calling, and left after two months.
She became a Carmelite tertiary, taking the name Maria Teresa of Jesus.

Back home she began teaching secular and religious topics to local girls, and effectively started a small school for them. While looking for a place to start a formal school, she was asked by a town council to take over a local school; she did and it formed the base for a religious institute;

On 15 October 1584 this embryo was formally founded as the Sisters of Our Lady of Mount Carmel. However, on 30 November 1859, during a period of anti-clerical sentiment in Italy, her institute was dissolved and the school secularized.

It took years of work and waiting, but on 18 March 1878 Mother Maria was able to resurrect her community, this time in Florence, Italy where they ran a school, boarding house, and a Marian association, and lived a vocation of teaching, parish work, and visiting the sick.

Today the Institute has about 250 sisters and is spread through Italy, Brazil, India, Indonesia, Israel, Poland, Canada, the Philippines, the United States, and the Czech Republic, teaching, catechizing, caring for the sick and aged.