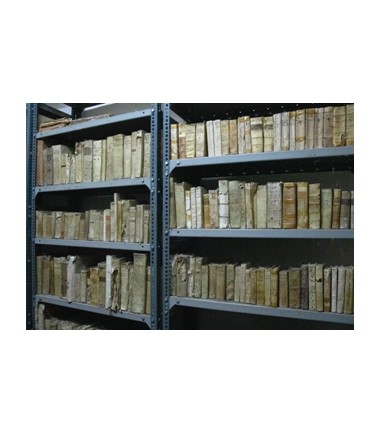 This is part of a study written by our late Father Angelicus Busuttil.  An eminent preacher and a prolific writer, he passed away on October 2, 2002 after a long and fruitful service to the local Church. He was pastor at Ta’ Xbiex between 1978 amd 1987.  He translated into Maltese the works of Saint Teresa and Saint Therese.

“…The Discalced Carmelites are the only Marian Order that set foot in Malta in the early 17th Century, and then, up to the end of the 18th Century, played an important role in the spreading of the devotion to Our Lady, not only in the Maltese Islands but also in far off lands, for the Order’s first Monastery in ‘Malta was to become an International Missionary College, catering for the evangelization of the East, from Asia Minor to Mesopotamia and even to Malabar in India.[5]

Indeed it was for this purpose that the Teresian Reform of Carmel came to make its first foundation in Malta, The then Head of its Italian Congregation, Fr Paul-Simon of Jesus-Mary (Rivarola), with his farsighted and practical mind, decided that the Order should put foot in Malta as a steppingstone towards its Missions in the Near East.  As a port of call in the hands of the Knights of St John the Baptist, ‘Malta offered a unique opportunity not to be missed.  Apart from the Missionary College in Rome, generally known as “St Pancratius” from the adjacent old Roman Basilica at the Gianicolo, the Order had a College in Belgium at Louvain for the training of underground pastoral work towards the re-evangelization of the northern parts of Europe; but, an international college in the very heart of the Mediterranean on the route of many Christian fleets was deemed to be in need for the training in oriental languages of the missionaries to the East.[6]

Fr Paul-Simon obtained the patronage of the Pope himself, Urbanus VIII, and of the Catholic King of Spain, Ferdinand III, for his project; then he approached the Order of St John through two emissaries he sent to Malta in October 1625, namely the Frenchman Fr Theodosius of the Holy Spirit and the Spaniard Fr Joseph-Angelus of the Mother of God.  With the help of the Bishop of ‘Malta, Fra Balthasar Cagliares, (see below – Cagliares was the only Malta-born bishop during the whole rule of the Order (1615- 1633) they succeeded in obtaining the required consent from the Grand Council of the Knights of St John under Grand Master Antoine de Paule.[7]  Bishop Cagliares, together with his family – especially his sister Ursolica – was to be the greatest benefactor of the Discalced Carmelites.  The Public Deed published at the Bishop’s Curia in Valletta on the 11th of December 1625 shows that the Bishop himself, out of his own resources, bought an extensive site from Fra Claudio Decosse and other private owners at Bur-Mula and then donated this site, with few houses and large adjoining or-chards, to the Discalced Carmelites.  Here they “could build a Monastery and a Church dedicated to the honor of God and to the Most Blessed Virgin ‘Mary and St Teresa, and for the purpose of their engaging in [p.372] divine worship and the spiritual welfare of the people in these Islands.[8]

This site at Bur-Mula was situated in the limits of the old parish of Vittoriosa, where a new city was to be developed and is today known as Bormla or Cospicua.  Temporary alterations were immediately carried out to the already existing buildings on this site, especially for setting up a provisional chapel.  Bishop Cagliares himself celebrated the first solemn High Mass on the Sunday within the Octave of the Epiphany of the following year 1626.[9]

The new House at Cospicua was at first under the jurisdiction of the Roman Province, but in the same year 1626, it passed to the new Neapolitan Province, and three years later to that of Sicily, till in the General Chapter of the Order held in 1632, the Cospicua Priory became the sole and exclusive responsibility of the Definitory General, in order to begin to fulfil its mission as an International Missionary College.  At this General Chapter, Fr Paul-Simon of Jesus-Mary was elected to serve his second term as Superior General and he saw to it that the Holy See would con-firm the erection of this College in Malta and approve all the necessary provisions decided upon by the Chapter General of the Order.  The result was the Papal ‘Bull of Urbanus VIII “Decet Nos” issued on the 2nd of March 1633.  By this time, it appears that the construction of the new church and monastery was brought to a happy conclusion,[10] as is recorded to posterity on the interior facade of the church above the High Altar.  (To be continued)

[7] Louis de St Therese OCD, Annales de Carm Dechauses de France, Vol. II, 812.  It is stated that some members of the Grand Council of the Order of St John opposed the idea of having `just another Religious Order on the Island’, one French member went so far as to propose to evict the Calced Carmelites from their Monastery in Valletta in order to give their house to the Discalced a proposal refused most vehemently even by the two Discalced emissaries.  Finally, all agreed to grant the required consent, the Grand Master himself being most favorable.

[9] Our Archives in Cospicua, Loose Document of Foundation, p. 8.

Baldassare Cagliares was born in Valletta in 1575.  The exact day and month are not known.  His father was of Spanish descent and his mother was a Maltese from Victoria, Gozo.  Pope Paul V appointed Cagliares bishop of Malta in 1615 when he was 40 years old.  Bishop Cagliares was a person who loved art and lived in a period where the church and state were competing to carry out the best works of art.  He was also the only Maltese Bishop chosen to lead the Maltese diocese when Malta was under the rule of the Order of St John between 1530 and 1798.  During his reign he built numerous villas in various localities around Malta such as in Żejtun, the Cittadella in Gozo and another in Buskett.  Also Bishop Cagliares established a number of parishes such as the parish of Qrendi in 1618 and restored the parish of Dingli by appointing a rector for the local church of the village which was left without a priest for a number of years.  Bishop Cagliares died on 4 August 1633 at the age of 58 after 18 years as bishop. From Wikipedia