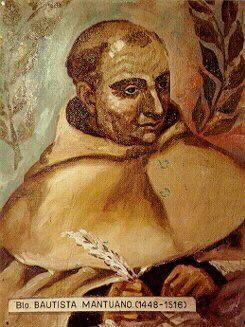 “As I was reading Fr. Calloway’s new book, Consecration to St. Joseph, on Day 15, of the preparation I was startled to learn something special. Our own Carmelite, Bl. s, head of the Carmelite Order from 1513-1516, was at the Holy House of Loreto on July 16, 1489. He shared an eyewitness account of an exorcism performed on a woman in the Holy House!

“I will not pass over a thing which I saw with my own eyes and heard with my own ears. It happened that a French lady of some means and of gentle birth named Antonia, who had long been possessed by evil spirits, was brought into the holy place by her husband that she might be delivered. Whilst a priest named Stephen, an exemplary man, was reading over her the usual exorcisms, one of the demons who boasted that he had been the instigator of the massacre of all the Innocents, being asked to his confusion whether this had been the Immaculate Virgin’s chamber, replied that it had been so indeed, but that he owned (confessed) it against his will, compelled by Mary to confess the truth. He moreover pointed to the places in the Holy House where Gabriel, and where Mary, had each of them been.”

How special this is!

Bl. Baptist Spagnoli of Mantua [Feast: April 17]
Born in Mantua on April 17, 1447, as a youth Baptist joined the Carmelites of the Congregation of Mantua at Ferrara. He made his religious profession in 1464 and served in many positions of responsibility in the community; he was vicar general of his congregation six times, and in 1513 was elected prior general of the whole Order. In his own time he was a renowned humanist “who brought his richly-varied poetry into the service of Christ.” He used his friendship with scholars as an opportunity of encouraging them to live a Christian life. He died in Mantua on March 20, 1516. (Our Holy Mother was born just one year before on March 28th, 1515)